Horses are heroes to millions of people. They enrich our lives and empower us - whether we come from a privileged background or a disadvantaged one.

The story of Sgt Reckless, a horse so heroic during the Korean War she was promoted to Staff Sergeant by the Commandant of the US Marine Corps, and is listed alongside George Washington, Thomas Jefferson, Martin Luther King, Mother Teresa and John Wayne as one of USA’s all-time heroes.

The Unsung Heroes Who Had No Choice: The War Horses of WWI

The loyalty that developed between horse, mule and man over the course of the war has led to many stories, poems and pictures that demonstrate the true affection between a soldier and his horse.

• J.M Breeton who wrote ‘The Horse in War’ summed it up well when we wrote: ‘the solider came to regard his horse almost as an extension of his being.’

• Artist Fortunino Matania (1881-1963) painted the best selling picture titled ‘Goodbye Old Man’, depicting a soldier saying a sad farewell to his equine partner, clearly moments from death. It Illustrates the extraordinary bond that existed between soldiers and their horses.

• A poem by Henry Chappell titled a ‘Soldier’s Kiss’ went along with the picture and these were used together to raise awareness of the plight of the war horses.

• 8 million horses and countless donkeys and mules died on all sides fighting on the Western front from exhaustion, starvation, drowning in mud and water, falling in shell holes, being shot and blown up.

• Mules were shown to have incredible stamina in the cold and heat. They played a huge part in the war efforts in Burma, Eritrea and Tunisia. Often their vocal chords were cut to keep them quiet.

• While the better bred horses suffered more from shell shock, the less well bred horses often learned how to lie down and take cover at the sound of fire.

• After the war, some of the best horses were kept by the British Army. Sadly, the ‘standard’ horses were often sold to French butchers for horsemeat or left to a life of hard labour in a foreign land, a terrible fate after serving their country so valiantly. 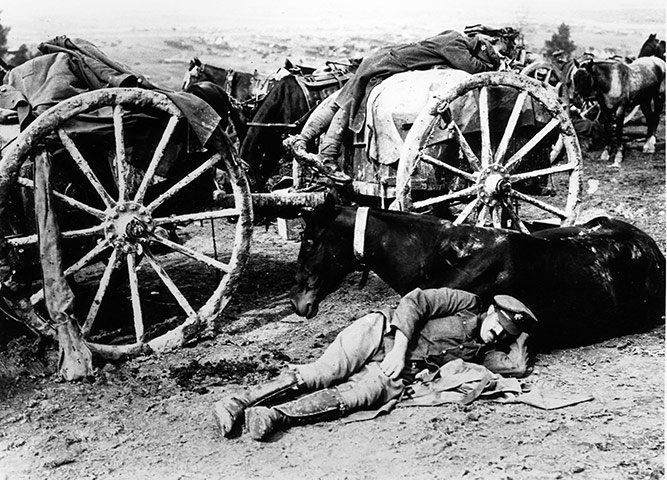 NB: It was Winston Churchill who intervened to secure the safe return of tens of thousands of war horses stranded in Europe after the First World War.

Warrior, the REAL 'War Horse' the Germans couldn't kill - who braved the bullets, barbed wire and shell fire of WWI. The tale of War Horse has gone from beloved children's book, to successful stage play to Hollywood movie directed by Steven Spielberg.

But whereas this one equine hero's exploits are fictional those of Warrior who carried General Jack Seely of the Canadian Cavalry throughout the horrors of WWI are all true. The bravery of the thoroughbred was documented in a book written by General Jack Seely in 1934.


The film War Horse is about a horse called Joey who touches the hearts of many people during WWI.

An Animal War Memorial opened in Hyde Park, England in 2004. Read about some of the amazing animals who were true heroes of the war.

Images of the many different animals used in 20th century conflicts are depicted in bas-relief on the inside of the longer section of wall.

On the outside of this wall a line of ghostly silhouettes is carved, representing the animals lost in the conflicts.

Sefton joined the British Army in 1967 starting as a riding school horse. By 1975 he had joined the Household Cavalry Mounted Regiment.

He was critically injured in the Hyde Park and Regent's Park London bombings which killed seven horses and four soldiers. Seften was given a 50:50 chance of surviving his terrible injuries.

During his recovery he received huge quantities of cards and mints; and donations reaching almost $1,000,000 were collected to construct a new surgical wing at Royal Veterinary College which was named the Sefton Surgical Wing.

He recovered sufficiently to return to active service and was subsequently awarded "Horse of the Year". Sefton became one of the first horses to be placed in the British Horse Society's Equestrian Hall of Fame, and with an annual award named after him.

On 29 August 1984 Sefton retired from the Household Cavalry, and moved to the Home of Rest For Horses at Speen, Buckinghamshire where he lived to the age of 30.

Only three horses have received the PDSA Dickin Medal. All three were Metropolitan Police horses on duty in the city of London during World War II.

Olga - Police Horse - Date of Award: 11 April 1947
“On duty when a flying bomb demolished four houses in Tooting and a plate-glass window crashed immediately in front of her. Olga, after bolting for 100 yards, returned to the scene of the incident and remained on duty with her rider, controlling traffic and assisting rescue organisations.”

Upstart - Police Horse - Date of Award: 11 April 1947
“While on patrol duty in Bethnal Green a flying bomb exploded within 75 yards, showering both horse and rider with broken glass and debris. Upstart was completely unperturbed and remained quietly on duty with his rider controlling traffic, until the incident had been dealt with.”

Regal - Police Horse - Date of Award: 11 April 1947
“Was twice in burning stables caused by explosive incendiaries at Muswell Hill. Although receiving minor injuries, being covered by debris and close to the flames, this horse showed no signs of panic.”

The Dickin Medal is a large, bronze medallion bearing the words “For Gallantry” and “We Also Serve” all within a laurel wreath. The ribbon is striped green, dark brown and pale blue representing water, earth and air to symbolise the naval, land and air forces.

During the Second World War (1939-45), PDSA's founder Maria Dickin CBE was aware of incredible bravery displayed by animals on active service and the Home Front. Inspired by the animals’ devotion to man and duty, she introduced a special medal specifically for animals in war.

The PDSA Dickin Medal, recognised as the animals’ Victoria Cross, is awarded to animals displaying conspicuous gallantry or devotion to duty while serving or associated with any branch of the Armed Forces or Civil Defence Units.

Jimmy 'The Sergeant' was born in WWI trench at the Battle of the Somme in 1916 and became a mascot for British Troops.

He was wounded by shellfire three times during two years on the frontline. He was taught to raise his hoof in salute by the soldiers who brought him up.

After the war he raised thousands of pounds for the RSPCA through charity work in Peterborough.

Jimmy was posthumously awarded the Dickin Medal for bravery, the highest military honour for an animal – and made an honorary sergeant with three stripes on his bridle. Source: www.neddi.org

Simpson and his Donkey, Duffy

The epitome of sacrifice and courage in the Anzac spirit.

Duffy the Donkey transported injured soldiers to safety at Gallipoli, with his owner John Simpson.

This is a compilation of images captured on the day showing the hard work & devotion of a sight that is becoming rarer with time.

Each year these Heavy Horse events are harder to put on due not only to the drop in numbers of horses but the increased cost to get these beautiful animals to these events.

It’s only through the hard work and love of these animals by these people who own them that we get to see time's past in action today.

The small-bodied species of the Skyrian Horse is one of the rarest horse breeds in the world. In 2009 there were 220 Skyrian horses in Greece, of which 152 live in Skyros. The Skyrian horse is a protected species.

Skyrian Horses are friendly, social, robust, intelligent animals; a particularly friendly breed. Max height is 116cm and body-type is similar to that of the large horse. Their legs are slim, strong and wiry, with strong joints. The hooves are small, hard do not need shoeing.

The Skyrian Horse is a proven children's mount and ideal horse for equine-assisted therapy and children's therapeutic riding.

The Skyrian Horse (Eguus Cabalus Skyros Pony) is a native horse that lived all over Greece in antiquity. In legend, it has been considered a descendant of the horses that Achilles took with him to Troy, and linked to the horses of Alexander the Great and those shown as participating in the Panathinea procession depicted on the Parthenon's Frieze.

Some scientists believe that the Skyrian Horses are related to mountain, small-bodied horse races that migrated from Alaska along the Siberian Plateau and reached Europe some 12,000 ago. It's thought that they were brought to the island of Skyros by Athenian immigrants in the 5th Century BC.
The Skyrian Horse Society is a nonprofit assoc founded in Jan 2006. Registered in Skyros, the aims of the Society are to record genealogical data, upkeep the stud book and ensure a pedigree is developed for the Skyrian Horse. This along with other measures will help preserve, promote and develop the breed.

One of the magnificent relics of the imperial era in China is the Terracotta Warriors and Horses a total of approximately 22.000 square meters and is located in the city of Xi’an.

There are about 8000 pieces shaped like the Terracotta Warriors and their Horses. They also resemble the size warriors and horses were the size of the original.

The Terracotta Warriors and Horses are estimated to be about 2,200 years ago, dating back to the reign of the first emperor Qin Shi Huang.